SMMAC "Reading with Children of the Nakba" & "The Impossibilities of Representation: Frictional Conversations in Burj al-Shamali Camp"

"Reading with Children of the Nakba"

One oft repeated lament of historians of education and childhood is the difficulty of archival retrieval. Despite children being the lynchpin of so much social life, both past and present, their imprints can slip past capture. By way of a close study of one textbook in the early post-Nakba period, this talk will ask and try to answer three questions: What forms of archival collection are required to trace Palestinian children after the Nakba? Which children made themselves (or were made) visible? What are the consequences to this archival retrieval, conceptually, historically, politically? In aiming to write a story of schooling on the run, in displacement, under subjugation and dispossession, this talk argues that perhaps archival methodology is not so much, or only, in the finding or reading against a stable archive or collection, but in conjuring it into being, in unearthing ordinary treasures of extraordinary life.

Mezna Qato is Margaret Anstee Fellow at Newnham College, University of Cambridge. She is completing a book on the history of education for Palestinians, and convenes the ‘Archives of the Disappeared’ research network at the Centre for Research in Arts, Social Sciences, and Humanities, at Cambridge.

"The Impossibilities of Representation: Frictional Conversations in Burj al-Shamali Camp"

Frictional Conversations is based on an extended stay in Burj al-Shamali, a Palestinian refugee camp southeast of Tyre, in southern Lebanon, where I lived between 2006 and 2011, and have been working since 2001. During this time I developed and gathered – in collaboration with camp residents – an extensive digital collection of family and studio photographs, which also includes videos and audio recordings. By combining research, conversational practice, and performative interventions, Frictional Conversations extends the concept of the photographic image, - by dematerilising and rematerializing it differently - and questions the iconography of the Palestinian refugee. Being with, re-viewing, orally extending and performing the photographs are means of asking different questions: What status can photographs of a camp in a chronic state of exception have? How can the different (her/his)- stories of Burj al-Shamali residents be presented without being instrumentalised or fixed in one place (as victims or witnesses)? How can one create a collection which retains its potential to resist institutional archival practices? To approach these dilemmas, the photographs of Burj al-Shamali are considered agents rather than documents and memory devices. Their agency is given a context to unfold, not only to address questions of ownership, responsibility, and circulation, but to also retell the past in a way that opens up to possible futures.

In her practice Yasmine Eid-Sabbagh explores potentials of human agency through engaging in experimental, collective work processes. These include (counter-)archiving practices such as the negotiation around a potential digital archive (re)assembled incollaboration with inhabitants of Burj al-Shamali, a Palestinian refugee camp near Tyr, Lebanon, and radical pedagogical projects such as Ses Milanes-créixer a la natura, a self-organised forest kindergarten in Bunyola Spain, using nature as main infrastructure. Photography often acts as a medium for her to communally investigate notions of collectivity, power and endurance: for example, in her engagement as a member of the Arab Image Foundation (arabimagefoundation.org), a practitioners-led archival institution, and as a focus in her PhD in Art Theory and Cultural Studies from the Aca- demy of Fine Arts in Vienna (2018). 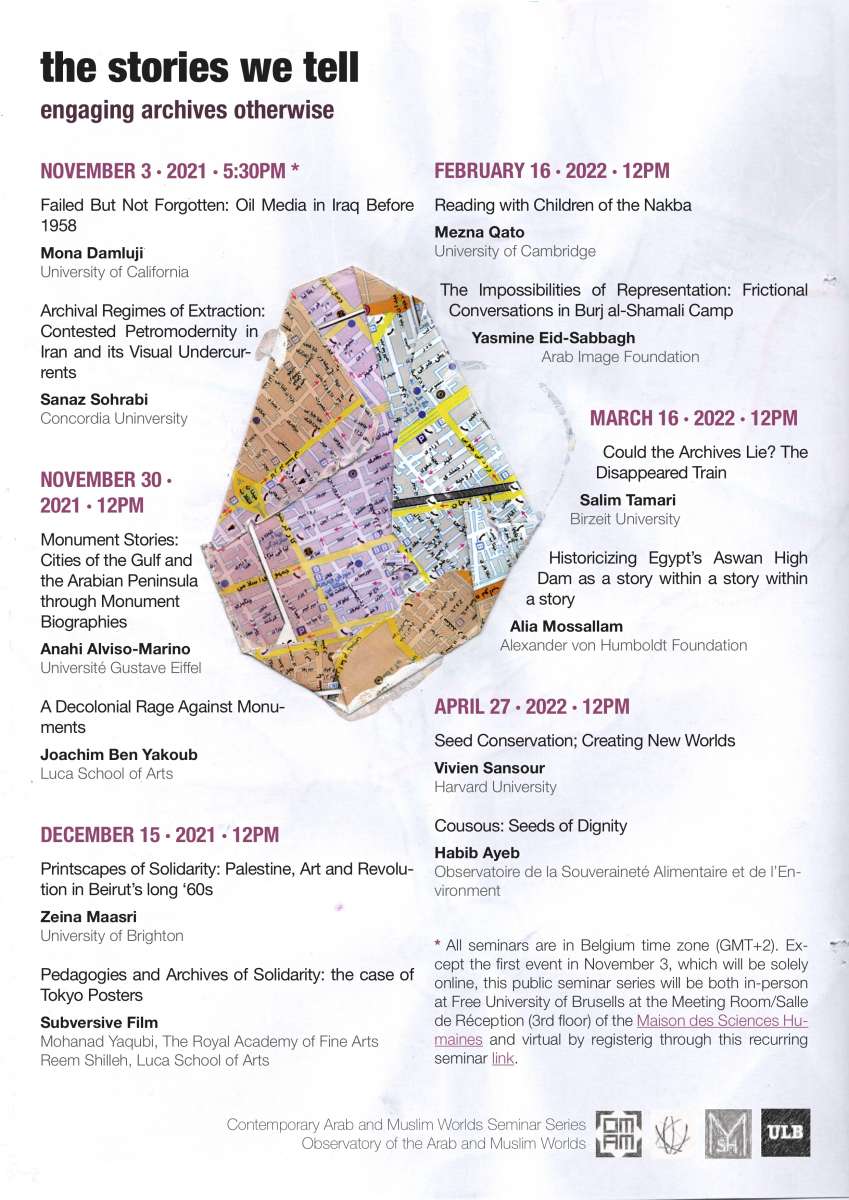