A massive migration of Thais to Europe has progressively taken place from the 1960s onwards. This migratory movement has been mainly oriented towards the reproductive, intimate domains of social life – “mixed” couple/family formation and the service sector of the economy. Women have been numerically dominating the Thai migrant population in the region and most often play overlapping roles as wives, mothers, workers, and citizens. In recent years, Europe has become the destination of kathoey (transgender women) and Thai male seasonal workers in northern Europe, which adds complexities to the emerging portraits of Thai migration, notably in terms of sexuality and gender. Despite the economic crisis that struck Europe in 2008 and the subsequent tightening of migration policies in many of its countries, the Thai migration continues to thrive, notably via the marriage and family reunification channels. At the same time, Thailand has become a long-stay tourism and retirement destination for an increasing number of Europeans. European long-stayers in Thailand are predominantly men, many of whom are in romantic/marital relationship with Thai women and, less visible, in same sex partnership with Thai gay men. Migration flows between Europe and Thailand are embedded in as well as transforming gender, social class, and family relations in both ends of migration. Taking this into account, the present international workshop aims to explore, using comparative and interdisciplinary approaches, the recent developments in this specific migration phenomenon, particularly at this time of global pandemic that hampers people’s movements across national borders. It will bring together leading scholars in Europe and Thailand who have been working in the research field of Thai migration, thereby paving the way for future scientific collaborations.

Register before 1 May: Register 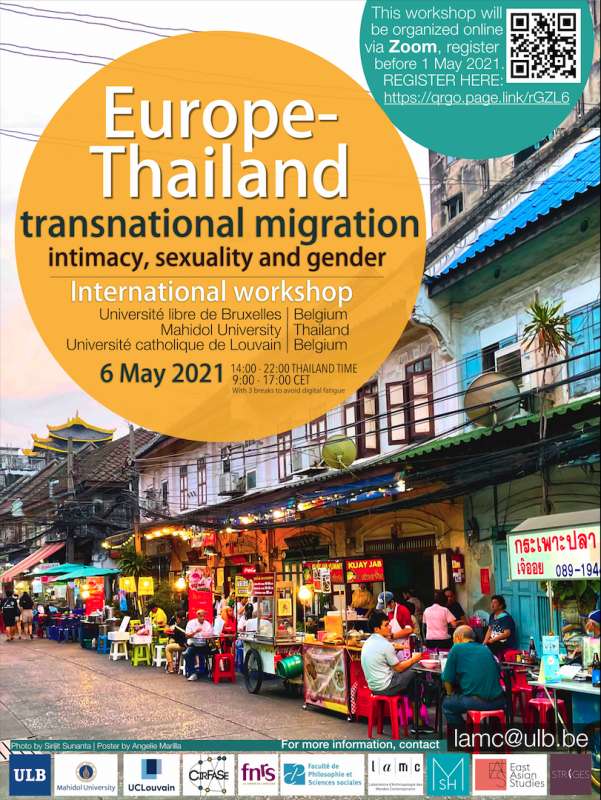