Conférence : AGAINST THE INFRASTRUCTURE OF COLONIAL CAPITALISM

AGAINST THE INFRASTRUCTURE OF COLONIAL CAPITALISM

Colonial occupation has been the driving engine behind a prolific and highly profitable defence industry for Israel and Israeli companies. For Israeli companies, the symbiotic and mutually beneficial relationship between private capital on the one hand, and the Israeli military apparatus on the other, serves as a lucrative opportunity to test their technologies and market them to customers worldwide. This partnership provides the basis for Israel’s infrastructure of occupation. In an era marked the so-called “war on home-grown terrorism” and racist refugee policies, Israeli companies have positioned themselves as leaders in developing solution for urban policing, surveillance and border control. This lived reality forces us to look at the structural roots of both our oppression as well as dispossession through anti-colonial and anti-capitalist analytical frameworks that are anchored in a feminist tradition and grounded in forms of transnational solidarity.

Riya Al'Sanah is an activist and a member of the Palestinian feminist movement Tala'at. Al'Sanah's research focuses on issues relating to political economy and the Palestinian labor movement. She's currently a research coordinator at Who Profits, a research center investigating private sector complicity in the Israeli occupation economy. Al'Sanah holds an M.S. from the School of Oriental and African Studies in London, where she studied politics of the Middle East and political science.

This open lecture is part of the series ‘Decolonizing Palestine. Conversations after the Unity Intifada' which results from a collaboration between UGENT, UA, VUB, KUL and ULB. The lecture series is supported by the Global Minds Fund 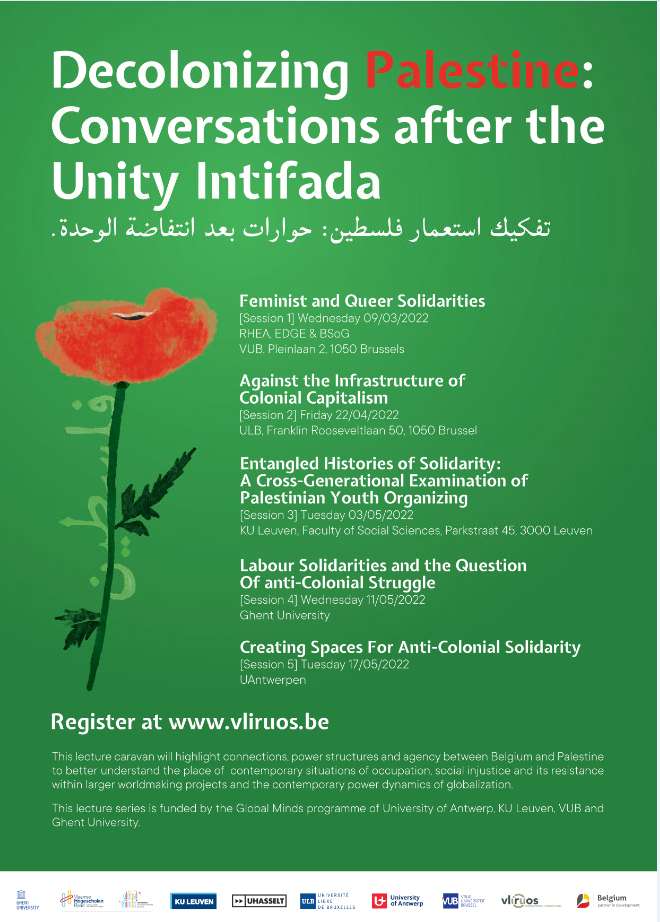