Since the second half of the 1990s, historians from various backgrounds have operated a series of epistemological and methodological shifts in the study of Uyghur history. Drawing on subaltern and postcolonial perspectives, as well as the contributions made by New Qing History and its critical assessment of the prevailing sino-centered approach to the history of the Qing Empire, scholars have developed new approaches to conducting historical research on the political, economic, and social life of the people who nowadays identify as Uyghur. The new academic literature participated in the emergence of discussions on the colonial nature of the policies that successive China-based states have imposed on the region and its peoples since the end of the 19th century. Far from providing oversimplified narratives of these historical developments, this debate has brought to light their manifold complexities, and offers rich avenues for future comparative studies.

The first series of questions we wish to set as a baseline for this two-day conference is thus grounded in the comparative history of colonial empires. To begin with, to what extent can we compare the evolving colonial dynamics played out in the region with other colonial contexts? How did Qing military rule over the region evolve into a colonial endeavour? What can market practices and the exchange of goods tell us about new and shifting local power dynamics? How did state practices affect these? To what extent did the involvement of the Russian, British, and Ottoman empires in local politics influence the region? Moreover, what were the intellectual underpinnings of the “civilising mission” initiated by late 19th century Han Chinese administrators? Finally, how did local people navigate these changing contexts? And what narratives did they develop to accommodate, cope with, or oppose the colonial rule of difference?

The second set of interrogations deals with the many shifts and changes that unfolded in the region during the first half of the 20th century. First of all, what were the legacies of Qing imperial domination in the Republican era? How influential were the 1911 and 1917 revolutions on the political and economic situation in Central Asia? What different perspectives can be gained from comparative study of patterns of domination on either side of the Sino-Russian border? How did the colonial enclosure of the region affect the social, economic, and religious life of its local peoples? To what extent can the various political movements that contributed to the establishment of the first and second Eastern Turkistan Republics be analysed in terms of anticolonial struggle? What were the intellectual backgrounds that shaped the policies and public discourses of these two political entities? Finally, we would like to address the many ways in which the Uyghurs and other inhabitants of the region navigated these changing political contexts. In this perspective we are particularly interested in people’s agency as expressed in their practices of avoidance of, resistance to, or collaboration with, the colonial state. Through these perspectives, we hope to propose a platform of collective reflection on the current debates that intersect the ever-increasing and widening field of Uyghur studies.

People interested in participating in this two-day conference should send their CV and a 500-word abstract of their communication before July 15, 2022, 6pm CET to uyghur.studies@uyghur- institute.org. Participants will be notified if their paper has been accepted or not by July 30, 2022, 6pm CET at the latest. 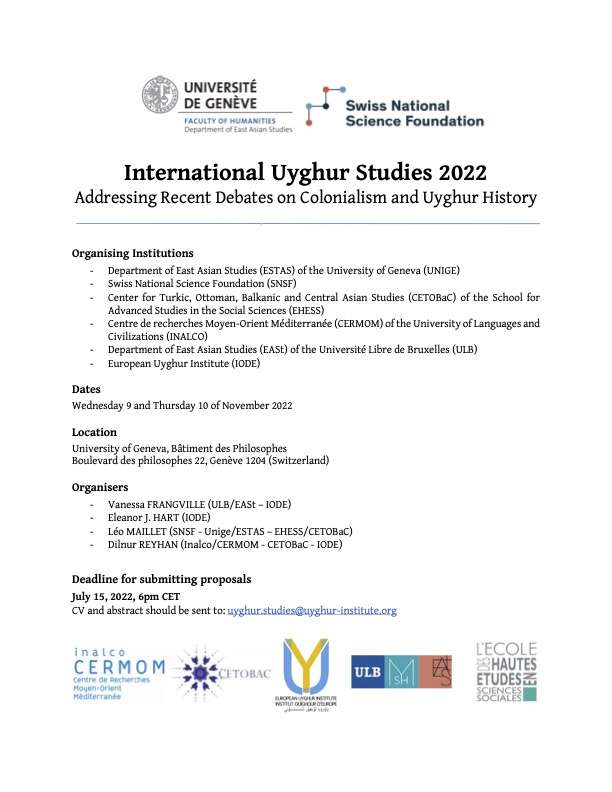